For several weeks our pastor Robb has mentioned every Sunday that maybe it would be cool if everyone dressed like Bible characters or just anyone from church history on Halloween. At first it was “Wouldn’t it be LAME if we did that?” And then “Wouldn’t it be FUNNY if we did that?” And it finally ended up the week before Halloween with “OK, I can pretty much guarantee you a few extra jewels in your crown up in Heaven if you dress up next Sunday.” Which is basically a dare. And I’m defenseless against a good dare.

So Daniel and I hemmed and hawed at the last minute trying to think up some funny costumes.

Daniel suggested I be a double rainbow, all the way.

Cause a rainbow is a Bible character.

But I didn’t have anything to make a rainbow costume. Instead Daniel used an old tunic costume he had and I used a big pretty piece of fabric from Thailand, some Mardi Gras beads and the walking stick I bought for Daniel at my family reunion year before last and a pillow for a fake baby belly.

You see, we’ve been moving through Genesis this year in church. A few months ago we came to the the story of Judah and Tamar. Quick recap–Tamar marries Judah’s son and he is struck down by God. So she marries her brother-in-law. He doesn’t want to father a child with her like he’s supposed to because it would be considered his dead brother’s kid. When he is remiss in his duties, God also strikes him down. Judah sends Tamar away and promises she can marry the other brother when he grows up. But he breaks his promise. And Tamar pretends to be a prostitute and Judah helps her get into a family way when Judah comes to town. She hangs on to his staff (family reunion walking stick) and cord (Mardi Gras beads) to prove who her Baby Daddy is when she gets a big belly and everyone in town wants to do away with her what with her no-husband-having, person-growing situation. But she busts out Judah’s belongings and he’s all “Oh yah, my bad.” The end.

Nice story, lots of lessons to be learned. By grown ups. In the sermon. For my part, it’s my responsibility to write the Kids Church lesson plans. Riiiiiiiight. So Robb attempted to tell me right before this lesson came up how important it was for me to be planning my lessons on EXACTLY what we were studying in church each week. But he couldn’t even keep a straight face through the first sentence. And the kids sang Father Abraham and glued macaroni to construction paper. Not really.

Anyway. In closing, the scenario Sunday morning went like this.

We were totally late for church and walked in the door in our super costumes just as Robb was saying that he really thought more people would come dressed up but no one did. Except for my friend Wendy who dressed up as Michelle Duggar and I didn’t even get to see her. Boo. Enter us: 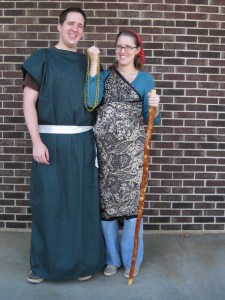 And cue the laughter. Someone asked if we were Mary and Joseph and, instead of answering, I glared around, shook my stick and beads, pointed to my belly and glared at Daniel. After a beat Robb yelled out “You’re Judah and Tamar?!?!?” It was awesome.

And then all my Sunday school kids thought I was actually pregnant and kept asking me if I was having a boy baby or a girl baby. Less awesome.

But we ended the morning with my new favorite quote of all time coming from Robb.

I'm a procrastinator and a busy bee just trying to focus and simplify my life. I hang out with my wonderful husband, dog and cat, knit, sew, bake, garden and overthink everything all while I'm busy growing a person. View all posts by TheVirtue